When lymph nodes are removed or damaged, this can lead to a blockage in the lymphatic system. Lymph fluid is unable to drain properly and accumulates, causing swelling, “edema.” This is lymphedema. There is no cure for lymphedema, but early detection and proper treatment make it manageable.

What is the Lymphatic System?

To understand what lymphedema is, it is helpful to understand first the function of the lymphatic system. The lymphatic system helps keep you healthy by moving lymph fluid throughout your body, and is the immune system’s initial line of defense against infection. The lymph fluid, acting as a “garbage collector,” finds bacteria, viruses, and other waste products and carries them through your lymph vessels to your lymph nodes.

There, lymphocytes, which are among your body’s infection-fighting white blood cells, filter out the waste, which is eventually eliminated from your body. As we mentioned earlier, damage to the lymph nodes impedes this process; the lymph fluid is unable to continue circulating through your body, collecting and bringing waste to the lymph nodes. This waste builds up, causing swelling, often in an arm or leg, though lymphedema can occur anywhere in the body.

There are two types of lymphedema: hereditary and secondary. Up to 10 million people in the United States live with lymphedema.

Hereditary lymphedema results from complications in the development of the lymph vessels and nodes.

Specific causes of primary lymphedema are:

Secondary lymphedema is more common than primary lymphedema and is caused by any circumstance, condition, or treatment that leads to damage to or impairment of the lymphatic system (the lymph vessels and the lymph nodes).

There are also several risk factors that can increase the likelihood that you may develop secondary lymphedema from any of the causes mentioned above. They include:

Again, none of the above is a direct cause of lymphedema alone.

There are four stages of lymphedema; they include some of the symptoms mentioned above.

Before the onset of objective swelling in an affected body part, patients complain of symptoms, typically described as a generalized aching, heaviness or a "strange feeling." Focal discomfort and a change in contour or volume are not present in this stage. 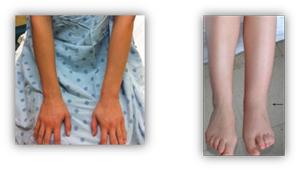 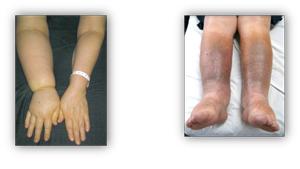 Lymphedema can lead to other health complications including infections. Cellulitis is a bacteria infection of the skin. Lymphangitis is an infection of the lymph vessels. Lymphangiosarcoma is soft-tissue cancer that can be caused by severe cases of lymphedema that has gone untreated. Blue-red or purple marks on the skin are possible indicators of the disease.

If you have had or will have a procedure that affects your lymph nodes, talk to your doctor about the risk of developing lymphedema. To reduce the likelihood that you will develop secondary lymphedema:

Tip #1:
Take care to protect affected limbs and areas of the body.
Cuts, scrapes, and burns can all invite infection. If you need to have blood drawn or get a vaccine, avoid your affected arm.

Tip #2:
Rest your affected limbs (or other body parts) after treatment to let them recover.

Tip #3:
Avoid exposing affected limbs to extreme temperatures.
(This includes the use of heating pads.)

Tip #4:
Keep your limb raised above the level of your heart.

Tip #5:
Avoid tight clothing.
If you have your blood pressure taken, if necessary, ask for it to be taken on your other arm.

Tip #6:
Keep your skin clean.
Inspect it daily for changes, and for cuts. Don’t go barefoot.

Lympha Press offers compression therapy solutions that can improve the quality of life for a person suffering from chronic lymphedema. Click here to learn more about our therapeutic options today.